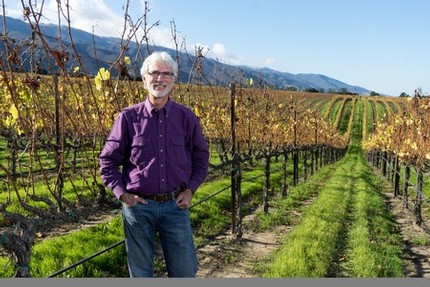 Having planted more than 20% of the entire AVA, farmed nearly a third of its vineyards and vinified hundreds of wines from its grapes, Steve McIntyre understands what makes the Santa Lucia Highlands so unique.

With degrees in viticulture and enology and a history in SLH that stretches nearly four decades, Steve has a unique perspective on the terroir and wines of this great appellation. Outside of McIntyre Vineyards, Steve was a founding member of Monterey Wine Company and for the past three decades, he and his wife, Kim, have owned and operated Monterey Pacific. Today, they farm 12,000 acres in Santa Lucia Highlands, Arroyo Seco, San Bernabe and Hames Valley.

Byron launched his winemaking career in 1985 in Carneros as a Pinot Noir and Chardonnay specialist at Saintsbury Winery. In 2001 he left to develop his own brand and consult for wineries in Napa, Sonoma, Monterey and Chile. His understanding of cool-climate viticulture and low-impact winemaking coupled with his intellectual curiosity and keen palate make Byron one of California’s most sought-after wine consultants. ​

Wine has always been a running theme in Kristen's life. During her youth she learned about planting and growing Chardonnay at her family’s half-acre “home” vineyard in Monterey County. In high school she worked as an office assistant for Monterey Pacific and a vineyard aide to her father during harvests. Kristen’s other passion ‑  animals ‑ inspired her to earn a BS in Animal Science, Livestock Business Management from California State University, Fresno. She officially joined McIntyre Vineyards in December of 2012. Today, as Tasting Studio and Sales Manager, Kristen oversees all direct-to-consumer sales, wine club and communications.